Adventure Creator supports having multiple Player characters that you can swap control between mid-game, popularised by games such as Day Of The Tentacle.

AC's Player-switching workflow is described in the following video:

Begin by defining your Player characters, and making them prefabs. This feature works for both 2D and 3D characters. Once done, go to the Settings Manager and set Player switching to Allow:

Click Add new player as many times as you have Player characters. Each time you do, a new Player field will become available. Drag your Player prefabs into them:

The first of these Players will be marked as the Default. To make a different Player the default, click the cog icon to the right of their prefab field and choose Set as default from the menu that appears:

AC will keep track of where each Player is - both their position, and scene. For all non-default Players, you must set their starting scene and PlayerStart. This too can be set from the cog icon, choosing Edit start data.... Doing so will bring up the Player start data window:

In this window, you can set a Player's starting scene, and which PlayerStart they will first appear at. To move an inactive Player to a different scene, use the Player: Teleport inactive Action.

You can switch Player character mid-game by using the Player: Switch Action: 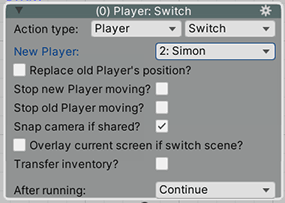 Such an Action can be placed in an ActionList that runs when e.g. a Menu Button is clicked.

When a new Player is made active, the previous Player will remain where they are - AC will keep track of their position and scene data. If the new Player is in another scene, the game will automatically switch to that scene.

In this case, the new scene's OnLoad cutscene will be run - as opposed to OnStart. If you wish to run an ActionList only in the event that you are switching Player, unset it from the Scene Manager and instead add the ActionList Starter component, check Run on scene load?, and then set the Scene load condition to Due To Switching Player:

You may wish for Players to be interactive - but only when not the active Player. To do this, go to the bottom of their Player Inspector and check Auto-sync Hotspot state?:

This will cause any attached Hotspot component to automatically turn off when they are made the active Player.