A recent trend in adventure games is to allow the player to choose a dialogue option while another character is still speaking - so that the dialogue sequence comes off as more natural. This behaviour can be found in games such as Telltale's Walking Dead series, and Revolution's Beyond A Steel Sky.

In this tutorial, we'll demonstrate how we can achieve this effect in AC.

In the previous tutorials, we made a two-level Conversation tree - the bottom of which looks like the following: 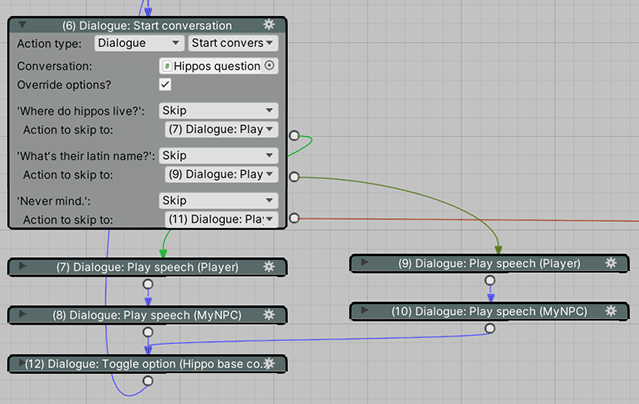 In order to achieve the effect, we'll first need to have the dialogue options re-appear while the NPC is replying. Expand the two speech Actions for the NPC, and check Play in background?:

If we have scrolling speech text enabled in the Speech Manager, we could alternatively make use of the [continue] token within the text itself, to have the dialogue options appear mid-way through: 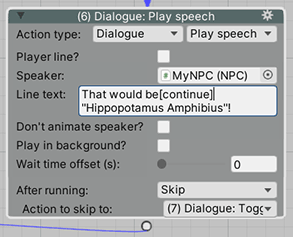 When we now ask a question, the dialogue options will appear while the NPC is replying. But if the player now clicks an option during this time, they'll interrupt the NPC.

If we don't want our Player character to be rude, we'll need to delay the Player's speech until after the NPC has finished speaking. We can do this with a Dialogue: Wait for speech Action, inserted just before the Player lines:

We'll need a separate instance of this Action for each dialogue response, and for each to wait for the NPC. But adding these then means that the ActionList will wait for the NPC to finish before continuing. Much more natural!